Five-time Olympic champion, current world record holder in the 100-meter dash, and third-fastest woman in history in the 200-meter dash; widely considered one of the best sprinters of all time. 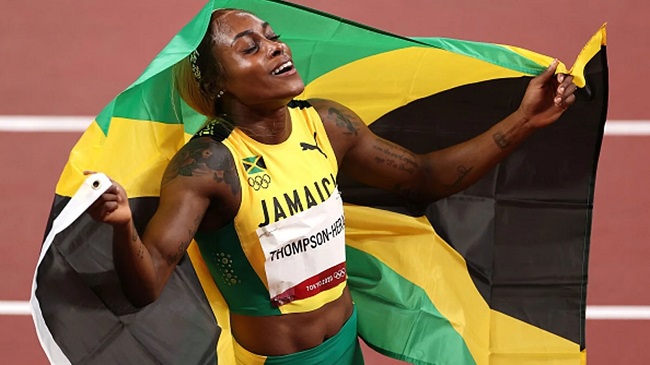 Thompson-Herah is the first woman in history and just the second sprinter overall (after Usain Bolt) to win both the 100-meter and 200-meter events at two consecutive Olympics.

She did this by taking first place at Rio in 2016 and then again at Tokyo in 2020. Six of her medals came from the Olympics.

But it was her silver in the 200-meter dash at the 2015 World Athletics Championships that propelled her to fame.

When she won the 100-meter and 200-meter events at the Rio Olympics, she joined an exclusive club: she was the first woman to accomplish this feat since Florence Griffith-Joyner in 1988.

Elaine Thompson-Herah, a Jamaican sprinter, lived up to those adjectives in 2021 when she won a record-tying three gold medals in track and field at the Olympic Games in Tokyo.

The 29-year-old finished behind her great rival Shelly-Ann Fraser-Pryce and Shericka Jackson in the June Jamaican trials for the 100 and 200 metres.

With her performance of 10.63 in Kingston, Fraser-Pryce moved into second place on the all-time 100 metres list for women, behind only Florence Griffith-Joyner.

However, two weeks later in Hungary, Thompson-Herah bested her with a season better time of 10.71.

Aside from a tiny time difference (10.73 to 10.76), both athletes breezed through their respective heats and semi-finals in Tokyo.

Thompson-Herah looked to find another gear around 70m, as he pushed ahead to win the final, with Fraser-Pryce narrowly edging off Jackson for silver.

The 2016 Olympic 100- and 200-meter champion, Shelly-Ann Fraser-Pryce, led an all-Jamaican podium as she won by a wide margin over Fraser-Pryce and Olympic 400-meter bronze medalist Shericka Jackson.

Thompson-time Herah’s is the second-fastest in women’s 100-meter history, and it beats the Olympic record established by Florence Griffith-Joyner in Seoul in 1988 by 0.01.

Quick from the blocks, Fraser-Pryce ran a 10.74 to win her eighth Olympic gold; Jackson ran a 10.76 PB to win bronze for the second time; and multiple-medal winner Marie-Josee Ta Lou of the Ivory Coast placed fourth in 10.91.

Thompson-Herah, who has battled a succession of injuries since winning the sprint double in Rio five years ago, made a sensational comeback to the world scene with this victory.

The 29-year-old threw her left arm in the air as she crossed the finish line and then let out a series of screams before collapsing in joy on the track.